Country singer and songwriter Jerrod Niemann has penned songs for Garth Brooks, Neal McCoy, Jamey Johnson, and Zona Jones, among others, and has built a strong fan base as a performer of his own material as well. Born in Harper, Kansas (but raised in nearby Liberal, Kansas), Niemann fell early under the spell of country legends like Lefty Frizzell, George Strait, and Keith Whitley, and soon learned to accompany himself on guitar while entering various talent contests. By the age of ten he was writing and performing his own songs. After high school he attended South Plains College in Levelland, Texas, where he also followed his music dreams by playing in the local clubs and bars. He self-released an album, Long Hard Road, in 1999. Niemann moved to Nashville a year later in September of 2000, signing a development deal with Mercury Records in 2001. The deal didn’t produce much of note, although Niemann now had a band behind him, and they began touring the club circuit. He self-released a second album, Jukebox of Hard Knocks, in 2004, then signed with Category 5 Records in 2006, releasing the single “I Love Women (My Mama Can’t Stand),” but the label soon folded and a projected album, Behind This Microphone, never appeared. 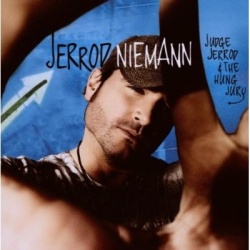 The single, though, opened some doors, and Niemann next signed to Arista Nashville in 2009. His first album on a national label, Judge Jerrod & the Hung Jury, appeared from Arista Nashville in 2010. Thanks to the number one single “Lover, Lover” and its Top Five follow-up, “What Do You Want,” the album was a hit, and Niemann followed it in the fall of 2012 with the wild, adventurous Free the Music. The album received some good reviews but produced no hit singles, so Niemann played it safe on its 2014 follow-up, High Noon. The first single pulled from the record, “Drink to That All Night,” went to number six on the Billboard country charts, besting anything released from Free the Music. Two subsequent singles from High Noon — “Donkey” and “Buzz Back Girl” — failed to generate a spark, and after the non-LP single “Blue Bandana” scraped Billboard’s Country Top 40 chart in 2015, Niemann left Arista Nashville in 2016. He swiftly signed with Curb and released the Lee Brice duet “A Little More Love” as a single. Over the next year, he worked on his Curb debut, This Ride, which saw release in October 2017.