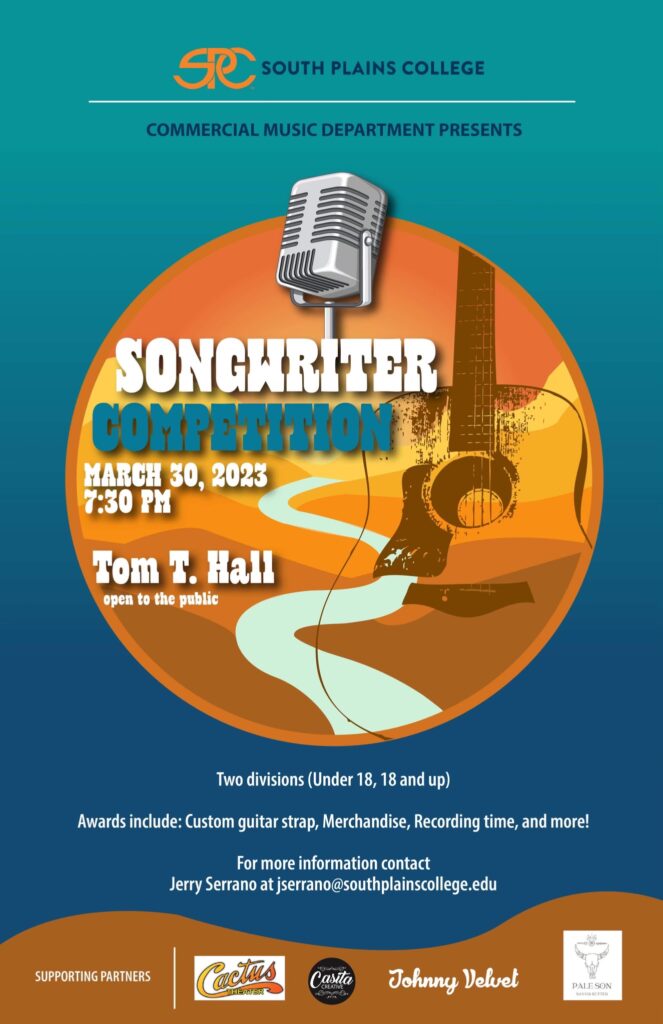 Hartin quickly established SPC as the place to study Country, Rock, and Folk music in the Lubbock area – a region famous for such musicians as the immortal Buddy Holly, Waylon Jennings, Mac Davis, and many more. Hartin created classes in all of the ‘typical’ contemporary instruments, as well as performing groups that provide students with the opportunity to put their learning to work.

Within just a few years, it was well known throughout the regional that SPC would bring a group to your town, civic group, church, or school. The college began a large scale summer touring group that took our talented students, stages, lighting, sound, and costumes “on the road.” Over the following decades, these groups would expand their reach literally from coast to coast.

South Plains College expanded our Faculty and subject base to train students in ALL these performance areas: Commercial Music; Recording Arts; Live Sound; Performance Venue Technology; and Music Business. All these interrelate in the modern business marketplace, and that model continues to inform the adaptation of programs in the current “Creative Arts Department.”

The 1980’s brought wider recognition of the program, and enabled SPC relationships with nationally known artists. The long and gracious friendship with Tom T. Hall resulted in our large performance venue being named in his honor. Today, the “Tom T. Hall Production Center” houses a large stage, advanced digital lighting technology, recording studio, television studio, and sophisticated live sound teaching/performance space! With all these sectors of the music/entertainment industry in one performance space, students can most clearly see the interconnectedness of jobs.

Also with the passage of time, the fruits of the early days have begun to show. Many Grammy Winners, session players, band members, business executives, songwriters, and technologists claim SPC as the start of their career. From its humble start in a single dance studio, to a sprawling complex of recording studios, rehearsal and performance spaces, laboratories, offices, and workshops, the “Creative Arts Program” at SPC only requires one more element to continue the tradition of excellence,,,

YOU, the future student need only enter the doors to feel the legacy and excitement of the Arts brought to life in this place!